你的位置：ww12345678 的部落格 | AX Helper > 网络文摘 > AX Modern POS (MPOS) Retail Channel Reports missing and setup
When in the Dynamics AX Modern POS, you have the capabilities to do reporting based on the local store DB. There are 13 canned reports that come out of the box, but a user can add additional as needed or modify the base reports.
Some may notice when entering the POS Reports screen that there may not be any reports in this screen out of the box. Its just blank. Or they get a POS Permissions error. This is because the Retail POS reports are driven off of POS Permissions and may not have any assigned. POS Permission groups need to be added and pushed down to the store for them to be visible (via the 1110 job in Figure 2).
I had an issue where the Retail Channel Reports Configuration would never actually populate the ‘Permission Group’ field after setting it (Figure 1). Setting it would only create a record in the table in the backend with a 0 RecID field value in the POSPermissions field I just tried to set.
Initially there were no records in the ‘RetailReportPermissionGroup’ field. And the data was never in the POS store tables (hence no reports visible). Only by adding a value to that field would it create a record in this table. And the POS Permission group would overwrite to zero. So it didn't actually work.
My fix to this was going into the AOT and manually set the fields to the POS Permission Groups (Figure 3). If you go back in the ‘Retail Channel Reports Configuration’ form after all the values are set, the POS Permission value in the backend would override the RecID to 0 again.

UPDATE: I solved the issue of the POS Permission groups disappearing in my post here: http://daxdude.blogspot.com/2017/05/ax-pos-permission-groups-and-leading.html

HELPFUL HINT 1
I would recommend that you copy an existing report and modify it till you are comfortable with how the reports run before creating one from scratch.
HELPFUL HINT 2
As a recommendation, only make the report reports action button visible to people who can actually access the reports. Otherwise it looks like a system bug. 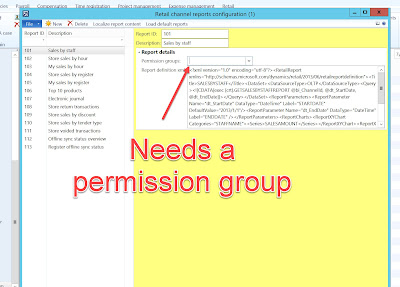 Figure 1 - The retail channel reports with the missing Permission Group 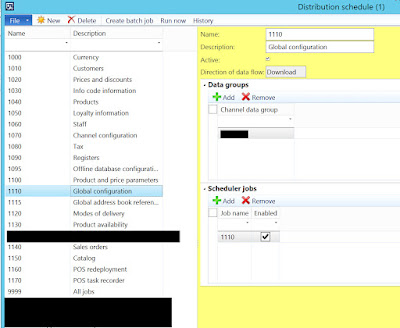 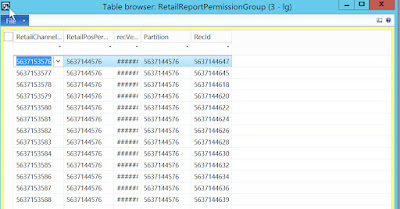